Vote has now closed for Cornish Object of the Year 2020

The public have voted for the winner in our online poll

The winner will be announced at the Cornwall Heritage Awards on Thursday 26 March 2020.

Our museums are a secret treasure chest of objects that uncover the key to Cornwall’s rich past. Scattered all over the county, our heritage sites contain some of the most exciting objects that each tell a unique story of times forgotten.

Cornwall has over 100 museums dotted across the county and every collection has at least one object that catches your eye, tells an amazing story, and leaves a lasting impression.

Every museum has a number of amazing, awe-inspiring and downright peculiar objects that have the potential to grab the headlines. This year we asked museums to nominate their most ‘Weird and Wonderful’ object.

Help us to determine the winner by voting in our online poll. The entry with the most votes, as decided by you the public, will be presented with an award at the 2020 Cornwall Heritage Awards.

The shortlisted entries are listed below. Please click on each one for more information. 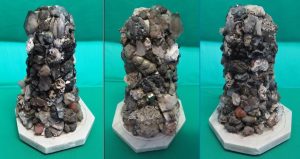 In 1982 a ‘Cornish Mineral Spar Tower’ was donated to the Newquay Old Cornwall Society. A note
with it read that it was about 200 years old and had been made by a Cornishman who worked in a
mine in the St Just, Penwith area. 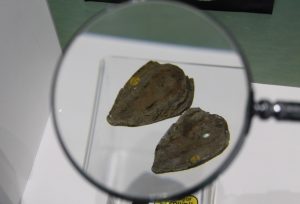 In 1932 the remains of a fossil fish were discovered in the Bude rock formation. It was classified as a
new species and named ‘Cornuboniscus Budensis’ in recognition of where it was found. It was
roughly the size of a sardine and had razor sharp teeth a bit like a piranha. 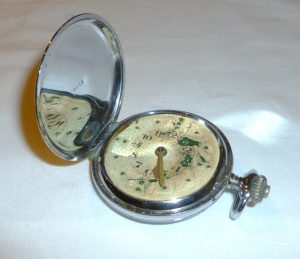 This is Jack Clemo’s first braille pocket watch that he used until his first marriage in 1968. Jack Clemo was a Cornish poet and writer who slowly lost his hearing at 19 and was blind by 39. Although his world was retracting inwards around him, it didn’t stop him from following his passion of writing. 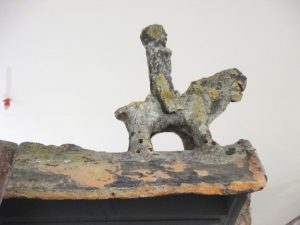 Probably dating from the 15th century, these rare Mounted Horsemen, perch on the ridge tiles above the Market Place. The Horsemen were a sign to travellers as a site where a `change of horses` could be obtained. They have survived the remodelling of buildings and even saved from
destruction when thrown into a skip! 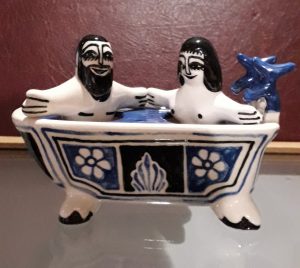 This distinctive piece of pottery was made by Bernard Moss who came to live in Mevagissey with his wife, Moreen, in 1949. Initially they lived in a rented cottage with no gas, electricity or even running water.  He was born in London, a descendant of Russian immigrants. The figures have a Jewish theme and the earlier models were painted terracotta, black and white with later models, after
1960, in blue, black and white. 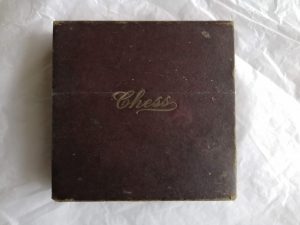 It’s 1944 and Private Patrick Linehan of the Duke of Cornwall’s Light Infantry (DCLI) is a Prisoner of War in Munich. In a recent oral history recording, at the grand age of 100, we learnt from Patrick about his time as a PoW and what life was like.

The object is a small chess set, which would have formed part of a Red Cross parcel. Patrick recalls being given this chess set by a South African Prisoner of War. When the South Africans entered the camp, they decided (being ex-prisoners) that in order to stop the Americans from taking control of divvying up the parcels, they would throw them all in the latrines! 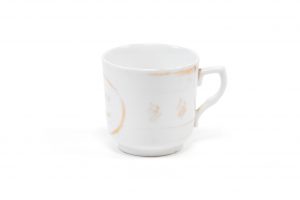 Behind some of the most unassuming objects is often the most powerful stories and this little white cup with its fading gold lettering is no different. When John and Lizzie Chapman lovingly handed the cups, with the words ‘Think of Me’ on them, as gifts to their family and friends they would never have known what lay ahead. This wonderful cup represents a story of love, loss, and self-sacrifice. 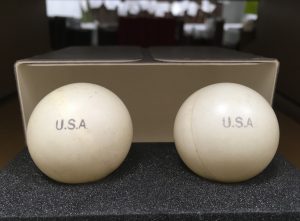 These balls were used by the American GIs stationed in Falmouth during WW2 who visited the Convent School at Tremough, now the Penryn Campus, to  play Ping Pong with the pupils. The men can be considered the most devout in their unit, forging relations with the Convent through their military pastor. However, if we consider that many of the men were barely 18, and the convent girls not much younger, these bouncy delights can perhaps tell a different story…

This poll is no longer accepting votes