This week we are showcasing the Audience Initiative Award category, which highlights successful projects that reach and attract new audiences for heritage. Following a conversation with a volunteer, Royal Cornwall Museum approached Truro Foodbank with the suggestion of including free-entry passes with food parcels over the summer holiday period. It was felt that those who might benefit most from the museum’s family-focused activities over the summer holidays were potentially being excluded by the entrance fee. The trial saw 80 passes handed out with a staggering 90% take-up rate, far surpassing expectations and delighting museum staff. The scheme gained local and national press coverage, leading to similar trials popping up across the UK. Aiming to engage with new audiences who may not have visited before, St. Cubert Church ran a series of free workshops exploring some of the skills that feature in the church architecture, including stained glass and stone carving. The art workshops encouraged hands-on interaction with the heritage of the space, a chance to have some quiet time and to learn a new skill. Examples from the workshops also formed the basis of a handling box that was taken out for sessions in memory cafes and care homes, facilitating a church experience for those less able to access the space. The feedback from these sessions found that the participants enjoyed the interaction and generally felt happier afterwards. Museum of Cornish Life, Helston: Can We Really Fit It In?

Spotting that the story of RNAS Culdrose in Helston was missing from the Museum of Cornish Life, a volunteer who also worked at the naval base, wondered if she could help fill that gap by creating a small display of archive material. After developing the relationship with RNAS Culdrose, the exhibition grew from a small display to a large temporary exhibition which included the tail-end of a Sea Hawk helicopter. The exhibition brought in a new audience to the museum, recognising the importance of the naval base to the history of Helston and Cornwall. In 2018, Cornwall’s Regimental Museum took part in the Fun Palaces campaign for cultural democracy. Fun Palaces are free events for everyone, encouraging everyone to be a scientist and everyone to be an artist. Working with six other organisations across Bodmin, they created a town-wide Fun Palace for a weekend packed full of action. It was the first time that the museum had got involved with activities that encouraged audiences to travel across the town. The pebble hunt was a real success and many visitors were arriving at the museum and asking for their stamp to show how many Fun Palaces across Bodmin they had visited. The Fun Palaces resulted in the largest number of visitors to the museum in a single day ever. Fowey Museum: In Search of Tywardreath

Inspired by the memory of a local resident with a passion for heritage, Fowey Museum embarked on locating the site of an ancient Priory, situated somewhere in Tywardreath. What started with tea and chat sessions for older people, recording memories and oral histories, rapidly became more inclusive. A broader range of activities shared learning with the community and involved more people in the discovery of their heritage. Working with the Cornwall Archaeology Unit, the museum organised supervised community digs, test pits in private gardens, family open days with identification of finds, and staged exhibitions in community venues. The project reached over 800 people and provided a reason for many people who would normally be facing issues of rural isolation, to come together and make a meaningful contribution within their community. When contacted by a local secondary school student asking for support in his community work, Mevagissey Museum jumped at the chance of mentoring the student. The museum attended the school’s careers evening to promote the various roles and volunteering opportunities at the museum. They also showed a film of the Restoration of a Mevagissey Sunday School banner and the Walk With Me app, to highlight the fact that although the artefacts are old, the museum is in the 21st century. The project has helped build a relationship with the local secondary school, with the aim to inspire young people to become interested in heritage. 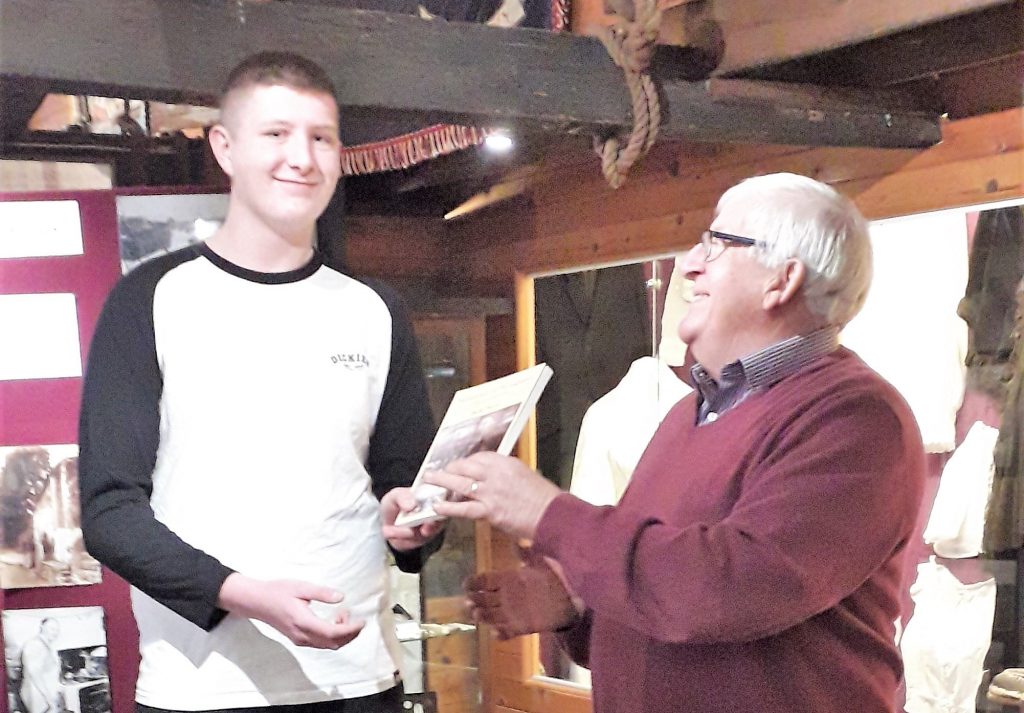