Citizen Curators is a free work-based training programme in museum awareness and modern curatorial practice aimed at volunteers from our community. The programme is provided by Cornwall Museums Partnership in collaboration with seven museums, with the main goal of providing a new form of meaningful museum participation. 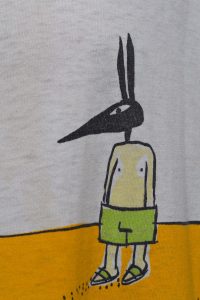 As part of my role as a Citizen Curator, I was invited to help curate a Cornish National Collection. I chose to submit a t-shirt owned by my neighbour Julian Mockford. The item was produced by Cabaret Mechanical Theatre and features a design by Paul Spooner, suggesting links to Falmouth’s automata-making community. I interviewed Julian to ask what the t-shirt meant to him, and what it might tell us about a place and time in Cornish history.

AF: You were given this ‘Egypt: Land of Mystery’ t-shirt by Sue Jackson of Cabaret. How did you know her and why did she give you the shirt?

JM: The truth is I met Sue through her husband Peter, who was the doyen of the antique trade in Cornwall and elsewhere. Urbane, witty and wise with a dry sense of humour! I knew him through the trade and when I opened Serendipity [an antiques shop] in 1982 at the bottom of the High Street our friendship blossomed and within days I met Sue. She was one of those rare people who could truly be considered a ‘life force’! Halfway up the High Street (on the opposite side) was the curious, not to say eccentric exhibition known as Cabaret Mechanical Theatre. Sue had a hundred ideas a day and quite a few of them worked! Skipping forward: how Cabaret ended up in Covent Garden was down to the narrow, blinkered attitude of the then Falmouth Town Council, the imagination of Sue, as well as Ken Livingstone (then the Leader of the GLC). At one of our riotous and jolly parties (my birthday) Sue gave me the Egypt t-shirt which has been much loved and well worn (hence its condition) over the last thirty years! 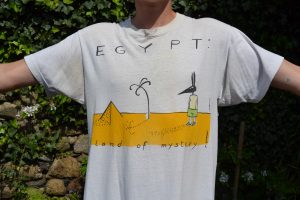 AF: How do you remember the Cabaret store/space and the High Street in those days?

JM: The High Street was the principle entry into Falmouth and in the 70s, 80s and 90s was a bustling, thriving hub of activity mainly centred around the antique trade. Among others were the Gealer / Jackson clan with several shops related to the trade. Also the Star & Garter pub which was previously Demelza’s – a naughty night club! In the early days Peter and Sue opened Oscar’s, a wine bar which in those days was a first virtually, for Cornwall! Oscar’s from day one became the centre of much of the entertainment and business of the High Street. Many a deal was struck over a glass of wine! Oscar’s had an upright piano, as did the Star & Garter, and anyone who could was welcome to play on either of them. Jazz nights on a Monday became an institution at the Star and ran for many years. Sue wrote poetry and we had readings in Oscar’s, and later in Covent Garden. The mix of shops covered all aspects of the trade, from stripped pine at the Old Town Hall, to Peter’s notoriously serious antiques shop, and down to me at Serendipity. There was also a splendid art deco building that housed a ships’ chandlery. The building remains, in a state of dilapidation, but the chandlery has long gone. Many were the parties held in the street, virtually any excuse would do (or none)! There was a tremendous sense of belonging. Cabaret was an important piece of the life and character of the street with its famous bubble blowing machine. When Cabaret left and also Peter’s pivotal antiques shop, it marked the beginning of the end and the High Street became what you see today. A charming mix of shops, everything from a baker to a tattooist or two.

AF: This t-shirt is designed by Paul Spooner. You have another by Tim Hunkin. Who else do you remember in association with Cabaret and the High Street?

JM: My good friend Tina Fabray worked for both Peter and then Sue in Cabaret both in Falmouth and London. I also remember many model makers including Paul Spooner, Tim Hunkin, Peter Markey and Danny Markey, among others. 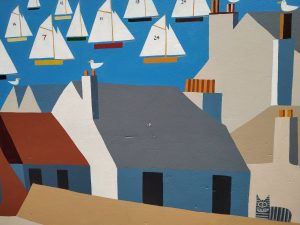 AF: There is a mural by Peter Markey near Falmouth Art Gallery, at the bottom of Webber Hill. Can you tell us about it and its recent restoration?

JM: It was commissioned by Falmouth Civic Society in 1985 and executed from a drawing by Peter Markey. It depicts a view from Gylling Street in Falmouth. Peter Markey taught Art at Falmouth School, as a department. Certain features of the mural (the cats, for example) are highly characteristic of sculptures he had in Cabaret. The wall which the mural is on is now the back of Tesco, and it was restored in 2018. [The restoration was carried out by Falmouth Art Gallery as part of their Heritage Lottery funded project ‘A Cabaret of Mechanical Movement’ – more info at automata.falculture.org]

AF: Coming back to the t-shirt, what personal significance does it hold for you? Is it at all representative?

JM: Yes, it reminds me of a very happy period of life in the High Street in the late 70s and early 80s. 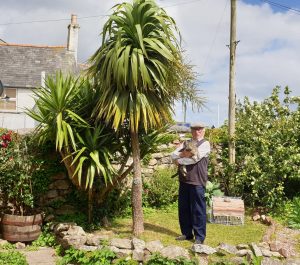