In this latest guest blog by wAVE Digital Marketing Intern, Magali Guastalegnanne, we learn more about the Coastal Timetripping experiences developed by the wAVE (Augmented and Virtual Experiences) Project. These blogs are a chance to give a deeper insight into the location, development, as well as the history that inspired the Coastal Timetripping experiences. We will examine both the technology used for the experiences, and the cultural inheritance of the area that they focus on. This blog will be focusing on the Bude Castle and Heritage Centre’s experience – ‘Captaining the Ceres’. 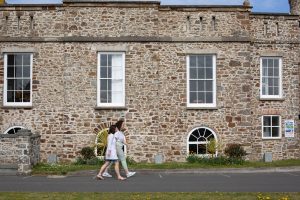 The Bude Castle and Heritage Centre is a castle built by Sir Goldsworthy Gurney in 1830. The museum is divided into themed areas which represent key elements of Bude’s cultural heritage, including the fascinating history behind the castle itself. We worked closely with the Heritage Centre to develop the ideas behind this experience, as well as to create the space where the Timetripping experience would be set up. ‘Captaining the Ceres’ uses virtual reality to simulate the experience of taking the helm of the old merchant ketch, the Ceres, and then guiding her safely into Bude’s iconic canal. This experience was developed with two parts of Bude’s history in mind – the canal and the Ceres herself.

Bude canal, in the 19th century, was a unique and world-renowned engineering feat that became the beating heart of Bude’s trade and commerce. It was built in 1823 to transport Bude’s mineral-rich sand further inland where soil was poor. The magnitude of this project was incredible. When it was first built the canal stretched for thirty-five miles and cost £118,000 to build – an incredible amount of money at the time. For all its ingenuity, the treacherous rocks the ship had to pass before it could even enter the canal took real skill to navigate. Though a surviving film clip of the Ceres gliding into the canal, that helped inspire Bude’s Timetripping experience, may make it look easy (you can watch the film here at 4.00). The Ceres has an interesting and lengthy history. Built in 1811 she began life as a fruit trading vessel between Spain and England, and even went onto serve in the Peninsula war. She was then sold to a Bude family and was handed down for three generations, until she fatefully went down in 1936 at the grand old age of 125 – an impressive age for a wooden ship created before the era of metal and steam, and that had continuously done service. 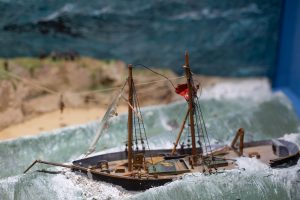 This was the inspiration for Bude’s Coastal Timetripping experience, which was developed by Falmouth University. The greatest challenge, as well as one of the main appeals of the experience, was the hours of work that went into creating a detailed but large coastline complete with significant landmarks. As visitors sail the Ceres they will have the chance to see Bude from a new viewpoint, and familiar landmarks that they may have seen before or find after the experience, like Compass Point, Barrel Rock, and the breakwater are given a unique angle and perspective. Many of these landmarks were more than mere points of interest in the 19th century, they were important markers by which sailors could safely navigate their way past the coast and into the canal. Even the entry into the canal, and functioning of the lock, have been carefully designed to operate exactly as they would’ve done, so that visitors can gain an understanding of this central part of Bude’s history. 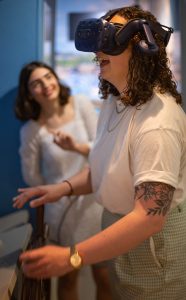 If you’re interested, you can try the Bude Coastal Timetripping experience for yourself at the Bude Castle Heritage Centre by booking a place here. There is a booking system in place to make sure Covid-19 regulations are followed, as the virtual reality headsets are sterilised using UV rays, which kill bacteria and viruses, including Covid-19, between visitors. There is space for two people at a time, one of which is designed to be wheel-chair friendly. If you’d like to know more about the wAVE project, then you can check out our webpage here. Or you can watch the film which we created about wAVE here.

You can find out more about the other immersive experiences on the official Coastal Timetripping website.

The core values of sustainability and inclusivity

Last week @cornwall_museum said goodbye to their b