Did you know that General Dwight D. Eisenhower – US Army five-star general and Supreme Commander of the Allied Expeditionary Force in Europe, spent time in Cornwall and visited Bodmin on multiple occasions during the Second World War? Read on to find out more from Sarah Silbereis – a valued member of the 2021 voluntary Citizen Curator programme at Bodmin Keep. 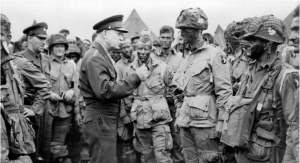 For me, the Citizen Curator Programme lit a spark that had lain dormant for some time. I have always enjoyed exploring history and believe that we must strive to understand our past to shape our future wisely. I have a family history of involvement with the RAF so have always been interested in military history. Having married an American, I have had the opportunity to visit some fantastic military museums ‘on the other side of the pond’, which developed my interest further. During lockdown, this programme has enabled me to forge a link with my heritage whilst delving into aspects of it that I never previously knew existed. Carrying out historical research without visiting an actual museum or archive (or even leaving my home) seemed an impossible feat at first. However, the very situation which prevented in-person networking amongst our small team of Citizen Curators has allowed us to access museum artefacts and eyewitness accounts in a variety of new ways. Artefacts are being catalogued by curators and made accessible online which means they can be explored from home. The ways in which we give history its voice are adapting, as are we, to this new world. 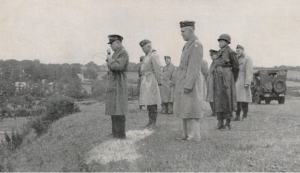 I began my research with three photographs of General Dwight D. Eisenhower inspecting troops at Bodmin Barracks on an unknown date in 1944. Little did the people shown in these photographs know that, after the war, he would hold America’s highest office as President of the United States of America. In 1944 – 45 however, Eisenhower was responsible for planning and supervising the successful invasion of Normandy from the Western Front, under the code name ‘Operation Overlord’.

What surprised me during my research was the heavy concentration of D-Day preparations in Cornwall. The 35th Infantry Division alone would have incorporated more than 16 000 men, spread across the South West. When one division was sent off to France, another would sweep in to replace it and the process would start all over again. I cannot imagine what these young men must have felt, leaving New York bound for Liverpool in 1944. The convoy of ships was estimated at around 200 vessels! The men of the 35th Division travelled by train to Exeter before being stationed in several local communities. Major Norman C. Carey of the 320th Infantry Regiment, which is part of the 35th Infantry Division, commented on his arrival in Exeter, “For lack of a single large barracks area, the division was billeted by units in numerous quaint little villages.” A Bodmin local remembered it differently, “they were camped under canvas all over Cornwall”! Bodmin welcomed around 2 000 troops from numerous regiments, including a medical battalion and special units. 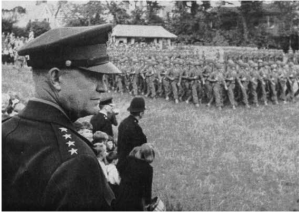 It is heartening that, despite the recent development of new housing estates in Bodmin, some of the key locations at the heart of the town’s wartime role still remain. The most prominent eyewitness accounts of General Eisenhower’s many visits to Bodmin revolve around his arrival or departure at Bodmin Railway Station, which is now Bodmin and Wenford Railway. The requirements of wartime security have meant that more official records are hard to come by, yet these eyewitness accounts describe a man with ‘quiet confidence’, a ‘ready smile’ and an ‘easy-going personal approach’. Michael Lyne, a Bodmin local, crossed paths with Eisenhower but his account didn’t surface until many years later:

“The Station Master, Mr Wenouth came out and said to me “sonny – don’t tell anybody who you have seen today, because if you do we will have the whole German Air Force on top of us”. I went home and naturally told my father who looked at me and said, “don’t be so silly”.“

Eisenhower enjoyed the use of a special GWR train during his preparations for the D-Day landings. This special train, code named ALIVE, comprised 11 vehicles including a special sleeping car used personally by Eisenhower. He continued to use this train after the D-Day landings and even had it shipped from Southampton to France, so he could use it in mainland Europe until it was returned to UK control on 30 July 1945. Eisenhower would have spent much time travelling in order to visit troops all over the local area, as far north as Wales and as far south as Mennaye Field in Penzance, where a slate plaque commemorating his visit would be unveiled 71 years later.

Perhaps the most exciting discovery of my research came when I found a video depicting scenes matching one of the original photos that began my journey down this rabbit warren of historical research. This video prompted more questions than it provided answers, yet it was fascinating to watch Eisenhower engaging in banter with the troops and seeing their best efforts to impress him along with his team. Eisenhower was accompanied in this footage by his son John, General George Patton and Commanding General Paul Baade, who was 35th Infantry Division Commander from January 1943 to December 1945. Thankfully, the video footage includes a clear date, 26 June 1944.

Knowing that Eisenhower made many visits to Bodmin during the first half of 1944 makes me wonder why this particular one was so well documented. The footage shows General Eisenhower at a mine field as he watched a mine locating drill. Soldiers can be seen prodding the field with bayonets during the drill, demonstrating their training. On the field is a sign, ‘BN. A.P. MINE FIELD’ which is possibly an abbreviation for ‘Bodmin Anti-personnel Mine Field’. One of the battalions stationed at Bodmin was the 110th Medical Battalion, quartered at the Poor Law Institute from 27 May – 3 July 1944. This unit would have served the medical needs of the entire 35th Infantry Division. Training was on physical fitness with special courses on mines and booby traps with concealment and cover. Whilst medics would not have been expected to clear a minefield, they would probably have been trained on how to get safely out of one! The medics would also undoubtedly have been trained in how to deal with the injuries that these nasty devices could inflict. Later in the footage, soldiers of the 137th Infantry Regiment can be seen lined up for inspection on the Cold Harbour sports field at Bodmin Barracks as General Eisenhower reviewed the troops.

The most poignant aspect of my research was the bravery of these young men, thousands of miles away from home, waiting eagerly to go to war so they could make a difference. Spirits were undoubtedly high in the footage I have seen, despite the horror of what lay ahead of them in France. 2 373 members of the 35th Infantry Division would later be killed in action and a further 11 382 would be wounded. Still, to this day, we owe these brave men so much.