Citizen Curators is a free work-based training programme in museum awareness and modern curatorial practice aimed at volunteers from our community. The programme is provided by Cornwall Museums Partnership in collaboration with seven museums, with the main goal of providing a new form of meaningful museum participation. The programme is led by Dr. Tehmina Goskar, Curator and Director of the Curatorial Research Centre.

The Citizen Curators are invited to collaboratively curate a collection distributed among our museums that reflects the diversity of Cornish society past and present. In our latest guest blog, Henry Purbrick, a Citizen Curator on the virtual 2021 programme with a placement at Falmouth Art Gallery, explains his submission to the Cornish National Collection, Falmouth Coastguard Station… 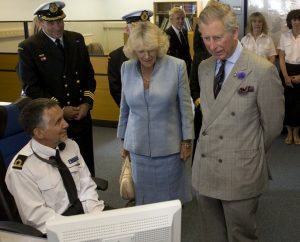 Everyone knows the Cornish heritage of the tin and copper mines, our fishing history, china clay works and industrial engineering. Most know how the international communication revolution got going at Porthcurno and the Lizard. But how many know of the massive changes in marine communications, and more especially that of ‘civil maritime search and rescue’ that took place during the latter years of the 20th century and the part that Falmouth Coastguards at MRCC Falmouth played in it. The important role played out in that little building out on Pendennis Point just below the castle, that many people hardly even realise exists.

Come to that, how many people really know what coastguards actually do anyway? No they don’t deal in smuggling or revenue. That’s the job of Customs and Excise. And no they are not the RNLI, that’s a charity run mainly by volunteers to rescue those in difficulties at sea or on the shore line. Although, it’s true that almost all of their tasking does come as a request via the coastguard. HM Coastguard is the government body responsible in the UK for carrying out ‘civil maritime search and rescue’ at sea and on the cliffs and beaches around our coastline. And it is true that they were once involved in the trade of illicit goods and largely created the walk now called the SW coast path in patrolling the coastline, but this ended early in the 20th century when the two organisations were split.

So what has this to do with the Cornish National Collection I hear you ask? Well up until 1999 the communications equipment carried on board ships had more to do with how big a ship was rather than where it went. Local communications, up to 60 miles, or so were carried out using VHF radio.  MF, manned and managed in the UK by BT coastal stations had a range of up to around 150 miles and beyond that ships were effectively out of range of shore based communications until they neared the other side. This meant that when I joined the coastguards in 1992 Morse code was still in operation, and it wasn’t unknown for ships to just disappear or be lost with no one on shore being aware of what happened.

All this changed in 1999 when the GMDSS system, or Global Maritime Distress and Safety System was implemented by the IMO (International Maritime Organisation). This relies on satellite technology and specifies the communications equipment required on a ship depending how far offshore it operates and includes the requirement for two separate and independent means for alerting a shore station in the event of difficulty or distress. And this equipment meant that instead of almost every ship requiring a dedicated radio officer, to deal with communications once the system became fully operational it become possible, for instance, for a passenger on an ocean liner to sit in their cabin, pick up the phone, and directly dial home with no human intervention (at great expense I might add). This was something that would have seemed a fantasy when I first joined. Under GMDSS each maritime nation designated a specific station to become ‘the single point of contact’ (SPOC) for all matters associated with international maritime emergency’s and search and rescue. Mainly due to its position close to Goonhilly on the Lizard, and it’s satellite receiving station, Falmouth was selected for this role in the UK. 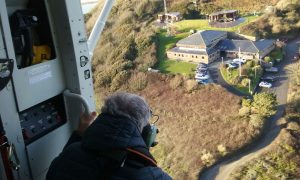 As the system developed and equipment was rolled out,  imagine every ship obtaining new satellite communications (through INMARSAT – or The International Maritime Satellite Organisation) with a unique calling number but with no directory to find out each ship’s number. Or with an automated device that alerted when a vessel was being called on VHF radio (DSC or digital selective calling) which meant someone wasn’t needed to sit listening all the time. This using a 9 number unique identifier. With again no directory. Such was the case at the start so the initial satellite database was built up by a watch colleague Mike Collier who created the first database by listing the numbers of all the vessels we had been in contact with. And I began the VHF ‘digital selected calling’ UK database by taking copies of the printed applications sent to UK radio licensing in Bristol and typing them in one by one on to form another new database. (Until a new innovation came along – they could send a weekly CD so the new numbers could be introduced electronically – and remember this was only during he last decade of the 20th century – how times have moved on!)

Over the years that the system developed and became international law, the expertise at Falmouth grew such that it became fair to say that we became the best in the world at what we did. I remember delegations from as far away as South Korea coming to learn what we did and how we did it. And one time, without irony, after receiving a call from the American SPOC in Norfolk Virginia asking for information on some matter and on giving them the result later, the operator sating that ‘Falmouth, you’re the best.’ And another time after we’d covered the rescue of some local transatlantic rowers, in Portscatho there was a news board keeping the local population up to speed by notifying that ‘God’s coastguard does it again.’

The station covered something like 2000 live incidents a year varying from lost children on beaches or surfers in difficulty to the rescue and recovery of merchant vessels and cruise liners, and everything else in between. There were many high profile jobs and it’s again true to say that if any UK vessel anywhere around the world got into difficulties, Falmouth Coastguard was bound to know about it and be working to assist those concerned, either in our own right if it was in our area of UK responsibility or with other international stations if the incident was within their area. I remember being in communication with Australia over the Tony Bullimore rescue (featured in Falmouth Maritime Museum), I was on watch assisting in coordinating the helicopters and emergency services during the Boscastle floods in 2004 and, along with many other colleagues, appeared regularly in the media reporting on some incident or other. As an additional task, we collated regular weather information for the met office, and as a side shoot to this, reported actual weather conditions and jobs carried out on a twice daily broadcast live on Radio Cornwall. Along with others I also carried out regular PR events speaking to many groups in and around Cornwall, explaining what we did, with the fine details of some of the more difficult or hair raising incidents attracting rapt attention. Unfortunately due to staffing cuts, change in policy, and re-siting of the main UK coastguard station this media presence has largely disappeared but I still occasionally get people today saying they miss hearing me on the radio.

However if overall reports today are fewer and less newsworthy you can largely thank this new technology for being efficient and preventing what might once have been a tragic or expensive loss. And also due to the passing on of the learned experience from officers who paved the way at Falmouth as this new technology was being introduced and implemented. This is why I think Falmouth Coastguard Station should be recognised and recorded along with the other major developments that have taken place in Cornwall (And not just because I worked there for nearly 20 years).

Talk to any officer who worked at the coastguard station during those years and I’m sure they’d all have a host of stories to share. The following, whilst not being a typical night shift, does give a flavour of what we were up to. It is taken directly from notes for an annual report I wrote up at the time. And it’s probably worthy of note, to say this never made the media as all worked out well by morning, no one died, there was no pollution and other things were happening out in the big wide world.

19 February 1997 – A dark and stormy night! At 2200UTC the ETV ‘Far Minara’ was tasked to standby the cargo vessel ‘TRAMP’ broken down and drifting 35 miles southwest of Landsend. At 2330 the cargo vessel ‘INISHFREE’ reported broken down 2.5 miles southwest of Landsend and drifting onto the Longships. The Sennen Cove and Penlee lifeboats were immediately tasked and the ETV diverted at best speed. As the tug approached the scene a third vessel the ‘SOCNA’ informed the MRCC that she was 3 miles northwest of Landsend, her cargo of wood having shifted causing a severe list and immediate assistance was required. The St Ives lifeboat was tasked to standby the vessel with the rescue helicopter from Culdrose. Before morning, the ‘Inishfree’ managed to restart her engines and get clear, ‘Socna’ was escorted into St Ives Bay to re-stow her cargo and ‘Tramp’ was eventually towed to Falmouth by the ETV. The new Watch Assistants, [including me] who ate their sandwiches on the way home, thought this was a set up to train them and the new District Controller, Colin Sturman, was overheard to say that he glad to see some real coastguarding having just joined from Yarmouth.

The core values of sustainability and inclusivity

Last week @cornwall_museum said goodbye to their b