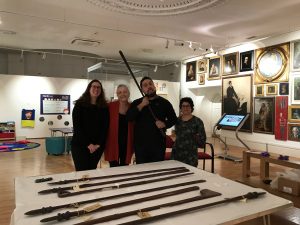 When Tehmina Goskar, Citizen Curators Programme Leader, delivered a workshop in 2017 at the Tairāwhiti Museum in Gisborne, New Zealand, she met with museum staff, volunteers and stakeholders to talk about her work at Royal Cornwall Museum and to discuss the museum’s collection of taonga Māori.

Tapunga Nepe is Tairāwhiti Museum’s Kaitieki (Curator) of taonga Māori. Ironically he was studying in the UK during Tehmina’s 2017 visit but he heard from colleagues about the items held by Royal Cornwall Museum. The collection comprises various taiaha belonging to mostly unidentified Māori iwi (tribe) but one, possibly two, were remarkable for their association with a Māori leader called Te Kooti, active in wars with the colonising British in the 1860s. One wooden taiaha (TRURI:1500.147) carries a label: ‘carved taiaha, a fine old one, taken from Te Kooti during the East Coast Campaign’.

Te Kooti (c.1832-1899) was an important Māori leader of the Rongowhakaata (a Māori iwi of the Gisborne region). Tapunga, who himself is Rongowhakaata, recently won a scholarship to travel to the UK for six weeks in order to locate, identify, study and honour Rongowhakaata taonga. His desire to examine Te Kooti’s taiaha guaranteed a visit to the RCM and the visit took place 6-8 February 2020.

Tapunga’s first step was to honour the Taonga Māori laid out on tables in the Treffry Gallery. He faced the ancestral objects, extended his arms and began the blessing which my colleagues and I had been invited to observe. It was brief – not more than five minutes. The room was quiet, his voice was hypnotic, and, as we stood there, heads bowed, an image of a group of Māori gathered in a clearing surrounded by dense trees came to my mind. The image vanished as soon as the ceremony ended. Everything was back to normal. This incident made me realise how unsatisfactory it was to simply place objects in cabinets or hang them on walls. Museums needed to find ways and means of bringing them to life. 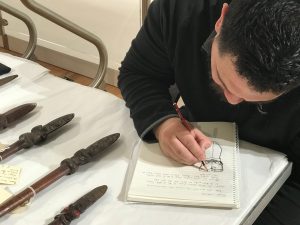 Tapunga completed his work and we look forward to receiving his findings and updating RCM’s records accordingly. Unfortunately, as is often the case, accession records and provenance of very early acquisitions can be incomplete or even missing. Though labelled as belonging to Te Kooti, no provenance or accession information for the Te Kooti taiaha could be found, nor any indication of how and when it might have arrived at the RCM.

Tapunga’s own research on the taiaha suggested that this was a particularly fine example with distinctive patterns. He also remarked that it was noticeably shorter than the others. The taiaha is a weapon using like a staff and its proportions are usually in relation to the height of the warrior (from foot to chin).

I later found an article from the West Somerset Free Press (23 April 1870) entitled ‘An interview with Te Kooti’ which describes Te Kooti as ‘…about 5’9”…wearing top boots…’. This may suggest that both Te Kooti and the taiaha were on the shorter side compared with others.

As Tapunga left, we promised that we would continue to look for accession information as well as connections between Te Kooti and the RCM no matter how distant. Subsequent research has revealed intriguing connections with various people: Mr. J.D. Enys, a former Royal Institution of Cornwall president (1893-95), the charity which runs Royal Cornwall Museum, also a prolific donor to RCM and closely associated with the collection and distribution of taonga Māori to museums in the UK and New Zealand; Sir John MacLean, another former president of the RIC in the term before Enys (1891-93) and Sir Donald McLean (1820-77) who was heavily involved in the East Coast War and is credited with securing peace through a number of initiatives, including agreeing with the Kingite leaders not to pursue Te Kooti or other fugitives into the King Country, a policy he maintained despite popular outcry.