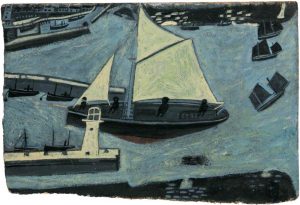 Falmouth Art Gallery and the newly re-opened Royal Cornwall Museum have joined forces to stage two exhibitions, one in each venue, showcasing almost the entire ‘Cornwall Council Schools Art Collection’ which has been looked after by the latter institution on behalf of Cornwall Council since 2011.

This impressive collection consists of artworks originally acquired from locally and internationally renowned artists for the educational benefit of all school children in Cornwall and was begun in 1961 following an anonymous donation of money to what was then Cornwall County Council with a note attached reading ‘To help primary school funds’.  After some debate the Council decided to use the money to start a fund to buy artworks to loan out to schools so that schoolchildren could interact with and learn from them.

The Council approached well-known artists to see if they would gift or sell a piece of work at a reduced price. The first work acquired in this way was ‘Frisky’, by Jacob Epstein, a small bronze sculpture of his beloved sheepdog, gifted by his widow (he had died in 1959).  The sculpture went on tour to different schools and proved so popular that the Council agreed to put aside money every year to collect more pieces of art. Barbara Hepworth and Michael Finn (then Principal at the Falmouth School of Art) were the Council’s advisors helping them to contact artists and grow the collection over the years. 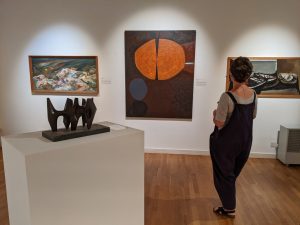 The collection contains works by many of the well-known post-war artists practising in Cornwall.  Barbara Hepworth led by example donating her own Alfred Wallis as well as a print and two sculptures and persuaded her husband, Ben Nicholson, their son Simon and Ben’s daughter Kate, by his first marriage to donate works too. Other notable artists include Leonard Fuller, Alethea Garstin, Patrick Heron, Bernard Leach, Janet Leach, Alexander MacKenzie, Lionel Miskin, Denis Mitchell, Dod Proctor, John Milne, John Wells, Wilhelmina Barns-Graham, Patrick Hayman, Bryan Wynter and many more.  In addition, Falmouth Art Gallery has loaned their version of ‘Orchard Tambourine B’ by Sir Terry Frost to the exhibition at the Royal Cornwall Museum to signpost a similar work from the Cornwall Council Collection which is permanently on display at County Hall in Truro. 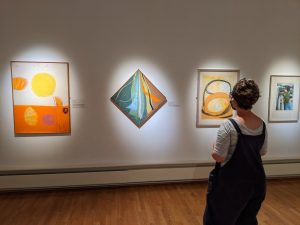 Both exhibitions have been imaginatively curated by Lizzy Broughton who is a Trainee Curator at Falmouth Art Gallery through a programme staged by Cornwall Museums Partnership and jointly funded by Cultivator, European Social Fund, Cornwall Council, the John Ellerman Foundation and Arts Council England.

Henrietta Boex, Director of Cultural Services for Falmouth Town Council, commented : ‘We are delighted to have the opportunity to work in partnership with the Royal Cornwall Museum and to display this important collection across our two venues.  It is a significant resource for children (and adults) in Cornwall and we will be making sure that schools are aware that they are able to borrow artworks from it.  I would also like to take this opportunity to congratulate Lizzy on curating two really good looking and well researched exhibitions – no mean feat for a first timer.’