We know the museum sector should talk more about when things don’t go to plan. We’re excited to share that we’re part of a cohort of FailSpace Champions trying to talk more productively about failure across the cultural sector.

When I first sent an email to my colleagues Celine and Ellie inviting them to join me on a one-day workshop in Doncaster about failure, I wouldn’t be surprised if they were a little offended. But here we are, two months later, reflecting on how CMP can be more open about failure and planning a series of our own Failure Workshops with our colleagues, partners, and networks. 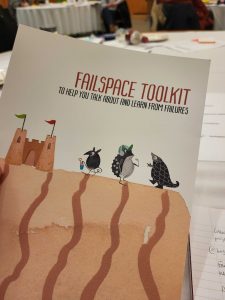 FailSpace is the result of AHRC-funded research by Leila Jancovich (University of Leeds) and David Stevenson (Queen Margaret University, Edinburgh) that focused on how the cultural sector can better learn from its failures, particularly its failure to broaden its audiences. The legacy of the research is the establishment of a cohort of Champions, of which CMP is one, to advocate for more open conversations about failure and share the FailSpace toolkit with their networks.

We were attracted to the project initially because it felt very aligned with our values (inclusion, collaboration, innovation, integrity). We were interested in finding out more, collaborating with new partners, and uncovering new ways of approaching our practice to share here in Cornwall. We rarely get everything right at CMP but often it is difficult to talk about this outside of small internal meetings. We’ve been uncomfortable with this and are looking forward to breaking down our own misconceptions and barriers about talking about failure. One of the most important things has been actually using the word ‘failure’ and not just talking about ‘hurdles’, ‘challenges’, or ‘learning opportunities’!

FailSpace asks cultural organisations to anticipate failure as part of the planning process. We can consider two binary extremes: an outright success, or – you’ve probably guessed it – an outright failure. There are various levels of failure between those two things and often, that doesn’t equal disaster or crisis. FailSpace also asks organisations to think about the five facets of failure – the ways in which work can experience failure: purpose, process, participation, practice, and profile. These facets will have varying importance for different pieces of work, depending on the drivers of the work.

Let’s fail (and learn) together

Over the next few weeks, you might spot the FailSpace logos begin to appear on our socials, email signatures and website – we’re using this to signal our status as Champions but also to normalise conversations about failure.

Between now and the end of the year, we’ll be running workshops within CMP and with our networks to talk more about failure and explore the FailSpace tools. We’re going to experiment with using them in our own processes and will share our journey with you – even if it fails!

🎥 As part of the Tresorys Kernow project, Cornw