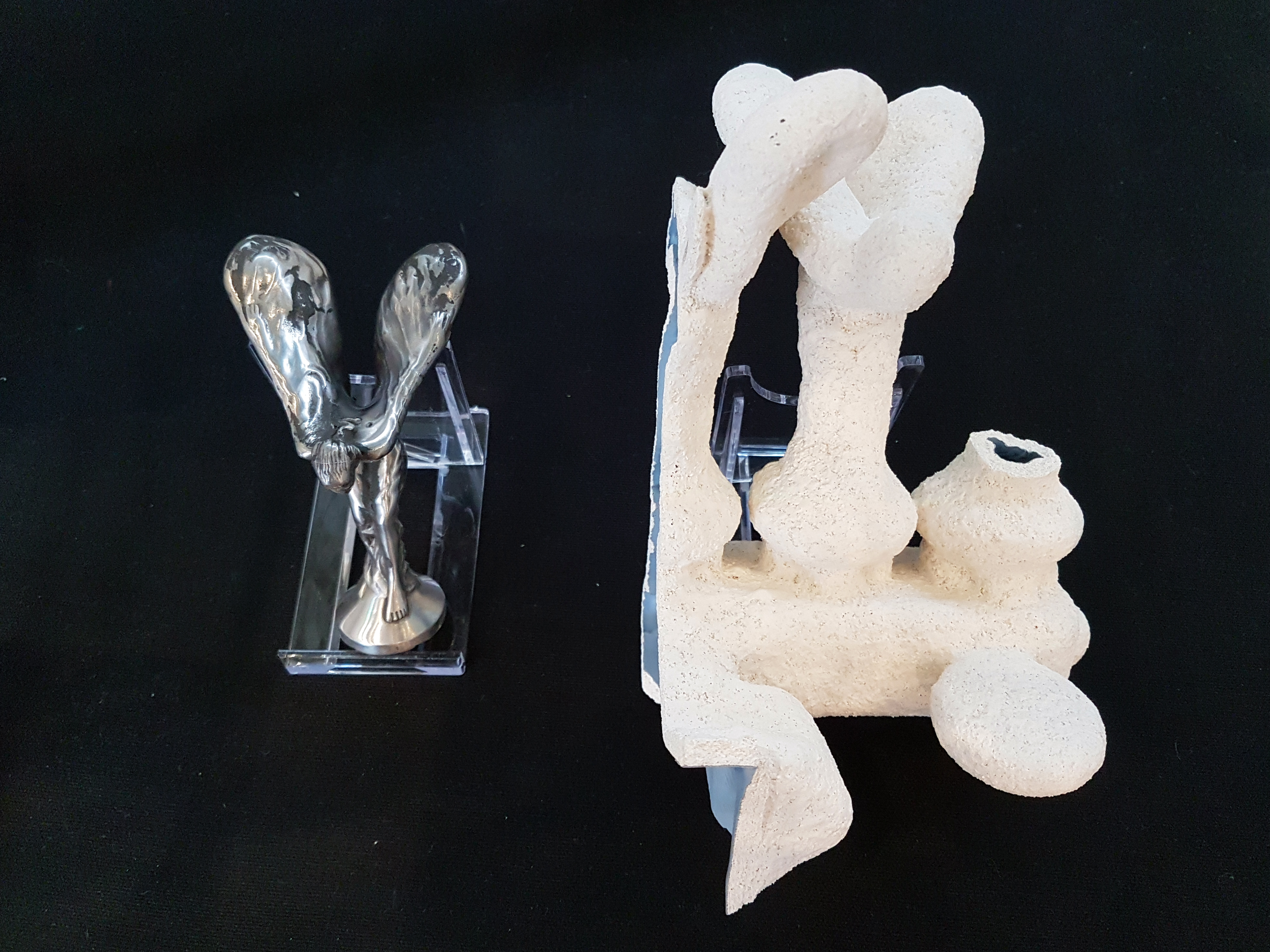 Developed in Cornwall in the 1930s, Molochite, from which the mould is constructed, is a clay product used in investment casting. This casting process relies on a wax pattern coated in a heat-resistant clay, which forms a mould for molten metals. The wax pattern is ‘invested’ when the clay mould is fired and the wax melts. Molten metal is poured into the clay mould and a cast metal piece results. Investment casting permits the formation of very intricate and complex shapes.

Whilst this example is a hood ornament, Rolls Royce use this clay in large quantities to cast turbine blades for jet engines. These heat-resistant clays, known as refractory materials, are able to withstand the high temperatures of molten metals, such as the nickel super alloys used to make turbine blades. Molochite is also used to line blast furnaces for the steel industry and in the distinctive black basalt ware produced by Wedgwood Potteries.

The ‘Spirit of Ecstasy’ hood ornament has adorned Rolls Royce cars since the 1920s and is said to represent a secret love affair between John Walter, second Baron Montagu of Beaulieu, and the model for the emblem – his secretary Eleanor Velasco Thornton. Two people from opposite ends of the socio-economic spectrum.

The mould and figurine once took pride of place in a trophy cabinet at John Keay House, former headquarters of English China Clays International (today Cornwall College, St Austell). When the company was sold in 1999, these items made their way to Wheal Martyn.

Molochite is still produced today at the Parkandillick site, just southwest of St Dennis, and Rolls Royce is still a customer.

Wheal Martyn says, ‘The ‘Spirit of Ecstasy’ hood ornament and mould represents the enduring relationship between Cornish clay and the aerospace industry. From the 1950s to the present day, Rolls Royce would become one of the China clay industry’s most prestigious customers.’

Shortlisting judge, Mark Trevethan Cornish Language Lead for Cornwall Council said, ‘This is a quirky object reflecting the quiet global impact of one of Cornwall’s key but little-known about industries’.